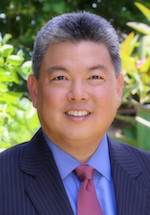 K. Mark Takai was elected to Congress in 2014 and currently serves on the House Armed Forces Committee and the House Committee on Small Business. He is one of the fourteen Asian American Members of Congress currently serving in the U.S. House of Representatives and the U.S. Senate.

Mark represents Hawaii’s First Congressional District, a district that encompasses much of Oahu and is one of the few Asian American majority districts in the United States.

Mark was a 20-year member of the Hawaii State House of Representatives before being elected to Congress. He represented the district of Aiea/Pearl City, first winning his seat at the age of 27.

Mark has served as a member of the Hawaii National Guard for 14 years. He is currently a Lt. Colonel and works as a Preventive Medical Officer. He deployed to the Middle East as part of Operation Iraqi Freedom in 2009.

Our vision is of a country where AAPIs have a powerful presence and role in all branches and levels of government and politics, achieved through AAPI voters who are engaged, informed, and empowered.

CAPA21 has roots in the Coalition of Asian Pacific Americans, founded in 1988 as one of country’s first AAPI PACs.

Paid for by CAPA21